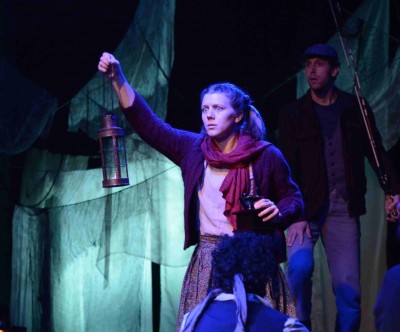 Runtime: 75 Minutes without an intermission.
Parking: Metered street parking is available in front of the theatre. Patrons are also welcome to park at Sears located 1 block east at Irving Park & Cicero.

When the fog refuses to lift from their sleepy Irish fishing village, siblings Cara and Finn must take matters into their own hands. The children take to the sea, only to find themselves washed ashore on the mysterious and dangerous Fog Island. A spooky adventure story adapted from Tomi Ungerer’s award winning picture book, FOG ISLAND asks what is means to grow up and face your fears.

Best Children’s Book of 2013 – Publishers Weekly
Top 10 Children’s Book of 2013 – New York Times Book Review
“a particularly enticing blend of mystery and magic… the kind of classic adventure that allows children to triumph over convention and common sense.” – Publishers Weekly
“Here, with a becoming respect for children’s curiosity about the forces that govern the world and their role in that grand scheme, Ungerer takes young readers to a place they have never been before…” – The New York Times Book Review
“Tomi Ungerer has created another masterpiece.” – Eric Carle (Author of The Very Hungry Caterpillar)
“…an atmospheric, folkloric adventure… this is a poignant, magical gift for all of us.” – Kirkus Review

FOG ISLAND will be enjoyed most by ages six and up. 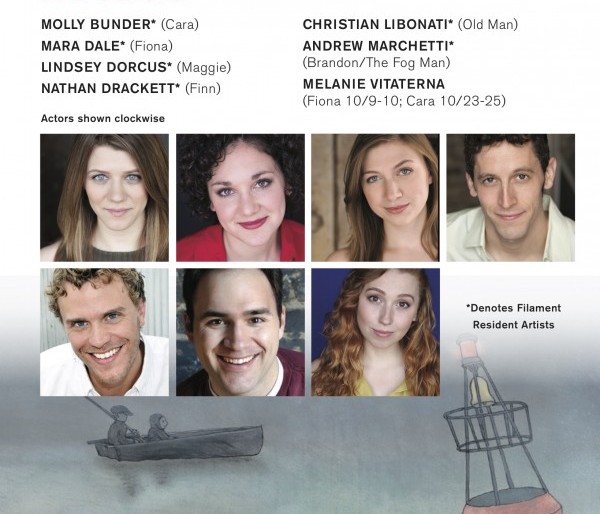 MOLLY BUNDER* (Cara)
As a resident artist at Filament, Molly has appeared in The Snow Queen, Lifeboat, Monster in the Hall, Sherlock Holmes and the Mystery of Portage Park, and “Crossing Six Corners.”  In Chicago, she has worked with TUTA and Stone Soup Shakespeare.  In the UK, she appeared in the one-woman drama, The Occupation of Heather Rose (Arches Theatre), The Little Prince (Edinburgh Fringe), Homeward Bound, and in the world premiere of Edwin Morgan’s Dreams—And Other Nightmares (Tron Theatre). Molly teaches piano, voice, and acting classes at the David Adler Music and Arts Center.  She holds an MA in Acting from Royal Conservatoire of Scotland, and a BA in Theatre from Randolph-Macon Woman’s College.

LINDSEY DORCUS* (Maggie)
Fog Island is Lindsey’s 9th show with Filament Theatre, including The Monster in the Hall, James and the Giant Peach, Orpheus,and The Snow Queen. Lindsey has also worked locally with The House Theatre (The Magnificents), Strawdog (Good Soul of Szechuan and The Duchess of Malfi), The Building Stage, Lifeline Theatre, Stage 773, Links Hall, and many others.  Up next, she will be going on a brief tour with puppet company Manual Cinema.  Lindsey is also a Company Member with Barrel of Monkeys, and you can often catch her in their Monday night revue, That’s Weird, Grandma!

NATHAN DRACKETT* (Finn)
Nathan Drackett is an actor, teacher, and musician in Chicago. He is also a Filament Resident Artist. He directed Crossing Six Corners: Bricks and Mortar, choreographed The Snow Queen, and was in Sleepy Hollow: The Folk Musical. He has been teaching Circus Arts for the past 8 years, and has taught at The Actors Gymnasium, Northwestern University, and the University of Chicago. He has performed with The Lyric Opera, Piven, Redmoon, 500 Clown, The Actors Gymnasium, and Signal Theatre. He also performs and teaches as a freelance musician, clown, and acrobat in and around Chicago.

CHRISTIAN LIBONATI* (Old Man)
Christian is a co-founder and the Managing Director of Filament Theatre. As an actor, Christian has been seen in the following Filament productions: Six Impossible Things, Crossing Six Corners, Monster in the Hall, Snow Queen, James and the Giant Peach, and numerous special projects. In Filament’s 2016 season, Christian will be directing Sherlock Holmes and the Mystery of Portage Park aka “The Bike Show.” Other Chicago performance credits include productions with The Marriott Theatre, Drury Lane Oakbrook Theater, American Theatre Company, The Mercury Theater, The House Theatre, and Theatre UnSpeakable. Christian helped to establish the theatre for young audiences programs at the Summer Theatre of New Canaan where he has been a frequent director & performer. Many thanks to the members of Filament’s staff, the Fog Island production team, and our local community who have made this production possible. Christian is a graduate of Northwestern University.

ANDREW MARCHETTI* (Brandon / The Fog Man)
Andrew is delighted to be a part of Fog Island. After receiving his BFA from the University of Northern Colorado, Andrew moved straight to Chicago and has since been lucky enough to work with such notable companies as Ka-Tet (Smudge; Fuddy Meers), The Plagiarists (Caesura; Wreck of the Medusa), Nothing Special Productions (The Alchemist) as well as Right Brain Project, BoHo Theater, and Chicago Fringe to name a few. As a resident artist with Filament, he would like to extend many thanks to this amazing staple of Portage Park for this wonderful opportunity.

MELANIE VITATERNA (Cara/Fiona Alt.)
Melanie Vitaterna is so thrilled to be working with Filament Theatre for the first time! In Chicago, she has performed with Dead Writers Theatre Collective and Citadel Theatre. A recent graduate of Northwestern University, Melanie appeared in several productions (some favorites including The Pirates of Penzance, Wiley and the Hairy Man, and This Is Not a Pipe Dream) and was a proud member of Lovers & Madmen, a theatre company dedicated to classical and classically-inspired work. This coming winter, Melanie will be understudying half the cast of Junie B. Jones, the Musical! at Northbrook Theatre for Young Audiences. 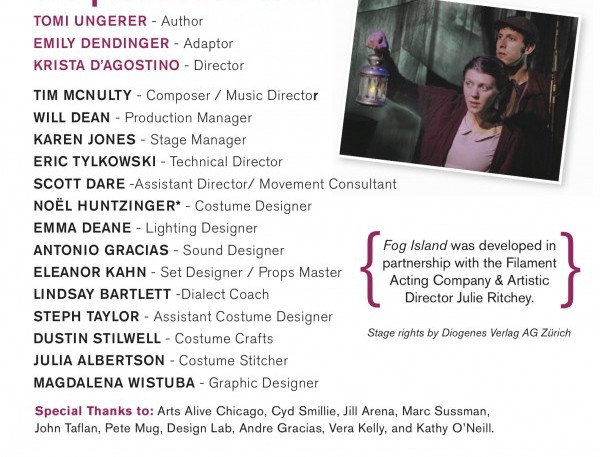 TOMI UNGERER (Author)
Tomi is an award winning illustrator and a trilingual author. He has published over 140 books ranging from his much loved children’s books to his controversial adult work. He is famous for his sharp social satire and his witty aphorisms and he ranges from the fantastic to the autobiographical. His career has also encompassed Architectural design, Invention, Advertising and Sculpture. This information and more can be found at www.tomiungerer.com.

EMILY DENDINGER (Adaptor)
Emily Dendinger’s plays include Hideous Progeny, which has been produced by LiveWire Chicago Theater, Holland Productions and North Park College. She is a two-time winner of Theater Masters National Play Competition, a 2013 City Theatre National Award finalist, a 2012 Heideman finalist and a 2015 Alliance/Kendeda National Graduate Playwriting Award finalist. Her plays have been developed at The Lark, Sideshow Theatre, LiveWire Theatre, The Trip, Mudlark Theatre, the Alliance Theatre, and TimeLine Theatre. Currently she is working on a commission for Filament Theatre. She is a member of TimeLine’s Writer’s Collective and the Dramatist Guild and a recent graduate of the University of Iowa’s Playwright’s Workshop.
KRISTA D’AGOSTINO (Director)
Krista D’Agostino is a director, actor, and educator from Boston. She is a teaching artist and frequent collaborator with Mudlark Theater where she directed original adaptations of Aesop’s Fables by John Taflan and Little Women by Christina Lepri. Additional Chicago directing credits include The Mistakes Madeline Made by Elizabeth Meriwether with LiveWire Chicago Theatre. A company member with WildClaw Theatre, she recently appeared in Scott T. Barsotti’s The Revenants. In Boston, Krista was the Artistic Director of Holland Productions where she directed Emily Dendinger’s Hideous Progeny and Swimming After Dark, Naomi Iizuka’s Aloha, Say the Pretty Girls, Jordan Harrison’s KID SIMPLE: A Radio Play in the Flesh, and Paula Vogel’s A Baltimore Waltz. For Italina.

[/tab] [tab title=”DISCOUNTS”] Free Previews!
We are offering free Early Viewer tickets to all who attend one of our preview performances. This people will be the very first audience members to see this world premiere! Previews are Fri, Sept 25 @ 7:30pm; Sat, Sept 26 @ 7:30pm; and, Sun Sept 27 @ 3pm. Seating is limited!

Groups:
Have a group? We recommend purchasing a Filament TenPass! For $120 you receive 10 tickets. The TenPass is good for all Filament productions for a year from your purchase date. Click Here for more details.

Check back for more information about upcoming Pay What You Can performances.

“If you haven’t heard of the impressive young company Filament Theatre, based in a home on the northwest side’s Six Corners neighborhood, this new show is a great introduction. Adapted from a picture book by the brilliant Tomi Ungerer,Fog Island features original Irish folk music by Tim McNulty, lively elegies of loss and longing. A bit scary but mostly charming, the story follows a brother-sister pair who travel to the island of the title in hopes of saving their fishing village from starvation, brave despite the villagers having long warned them of the “banshees” and “ballybogs” there…a timeless tribute to the magic of childhood. —Suzanne Scanlon, Chicago Reader ( Recommended)

“Among Filament Theatre’s many strengths is its superb use of its space, bringing spare, elegant sets to life with excellent movement direction and cast members who are almost eerily attuned to one another…

The adults of the village, including the kids’ parents, turn themselves into the storm-tossed boat and the red-eyed beasts of Fog Island. With nothing more complex than a few crates and lengths of rope, they become the imposing door to the Fog Man’s lair and the machinery at the center of the earth. Scott Dare’s movement direction, combined with sound design by Antonio Gracias and lighting by Emma Deane, is eerie, exquisite and masterfully carried out by the cast.

In terms of performances, Filament’s actors deliver as usual. Molly Bunder and Nathan Drackett are an appealing pair as Cara and Finn. Mara Dale’s and Christian Libonati are fine foils for one another, she as the hearty, upbeat pub owner and he as the melodramatic old man, constantly going on about banshees and the like.

Lindsey Dorcus and Andrew Marchetti lend a heartbreaking weight to what could have been an overly simple tale as Cara and Finn’s parents, as eager to give their children every opportunity they can as they are reluctant to see them have to grow up too fast….

“★★★★! Tim McNulty’s Musical direction and score, played and sung by the cast, encompassed both the heightened levels of joy and sorrow found in Irish folk. This, along with the actor’s excellent dialects (coached by Lindsay Bartlett), Hutzinger’s period costumes, Dendinger’s script, and other minimalist but effective technical features conveyed the experience and paradox of a not-so-distant Irish life and culture: a blend of superstition and mysticism, beauty and hardship, love and austerity, and fear and enchantment so that we get a real sense of time and place that will be intense and authentic for adults and children alike.” Lawrence Riordan, Around the Town Chicago

“We loved the show! Bring your whole family.”

“Saw it last night with my little girl! 2 thumbs up!”

“This is an outstanding show for the whole family!”

“We just borrowed the book from the library in anticipation of seeing the play! Can’t wait!”

“My son and I thought it was fantastic”

“It was a great show. Whole family loved it!”

“Children of all ages will enjoy the adventure,
and the music is charming.”