Allison Asks, What If? - Filament Theatre
by Filament
with no comment
Blog

This week, the Filament blog checks in with playwright Allison Powell, as she shares her experience adapting Choose Thine Own Adventure. 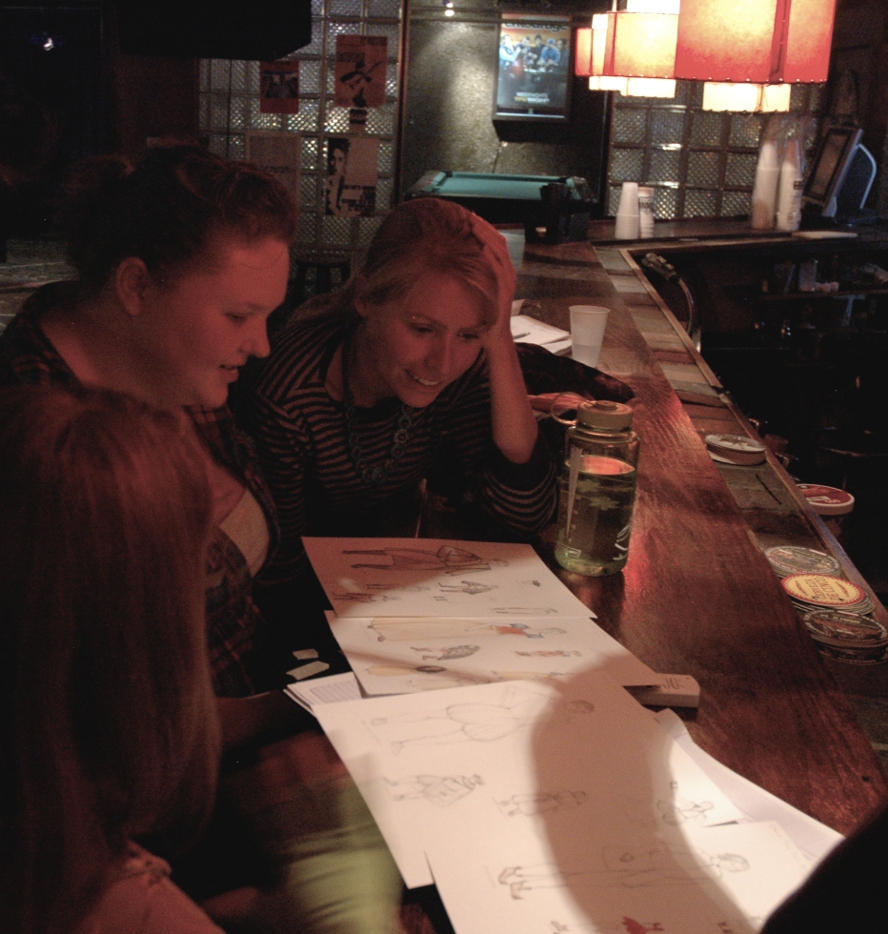 Allison Powell (right) in a rehearsal.

It’s alive, breathing, bickering, swashbuckling, beer guzzling, heart breakingly wonderful and that was in just the first ten minutes of Saturday night’s rehearsal in the venue. I have never been more excited about a show. Ever. And that’s a big statement because I excite easily.

Choose Thine Own Adventure had been brewing in the collective subconscious of Filament long before I sat down with my copy of the Bard and started piecing the show together. In fact, it was listed on the company’s website as a future production when I initially interviewed to be the Business Manager. I was devastated to hear (Director) Julie say that, for as brilliant of an idea as it was, they had postponed writing. It’s been on the Filament ‘to do’ list for so long that no one can even remember whose idea it was originally, just that everyone was itching for a chance to ask “what if?”

What if Juliet woke up 10 seconds sooner? What if Hamlet was a bit more action and a lot less talk? What if Lear was a better judge of character?

And the biggest ‘what if?’ of all: what if we could make Shakespeare fun again? Give it back to the groundlings as a bawdy, boozy, brazen good time—all the things we love about these plays—and drop all of those pretentious, boring production habits that have become the norm for Shakespeare. Don’t want to see a 3 hour performance of Macbeth set in 1690s Salem, Massachusetts? Me neither. Sill think codpiece jokes are funny? Me too!

I was not a Choose Your Own Adventure virgin going into this. In college I wrote a CYOA play with The Experimental Theatre Company (hi guys!) so I had some idea of how to structure this kind of show.

And the structure’s the thing (Check out this Scene Map!). With Shakespeare, the wealth of zany characters, thorny plot twists and gorgeous language meant never wanting for good material—but when you make a choice (and you’re going to make lots of them!) there is a ripple effect through the plot line, as way leads on to way. So figuring out how one decision in Twelfth Night would naturally lead to a scene from Othello was like a great unraveling. I got to pull at all of these loose threads to see where each one led me, until a bigger picture finally took shape. And if that’s my metaphor, then picture me completely tangled in yarn on a regular basis.

The script is now in its umpteenth revision, with brilliance regularly added to it by the cast and designers. But you get to make the final edit. 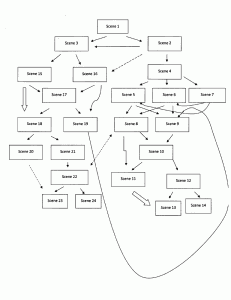 We have no idea what show you’re going to see when you come so we’re as excited as you are. And, mathematically speaking, the likelihood of any show happening twice is less than .00024%. (I calculated that so leave some room for error.) What the numbers are telling us is that each show is a once-in-a-lifetime experience—so you can come back and see it every night and you’ll always see something new. While that’s true of any live performance, it’s especially true of this one. It’s even possible some of the scenes will never be seen! Imagine, all of that writing, rewriting, blocking, memorizing of lines, costumes sewn, props painted and it never gets chosen! That’s a real risk, but we’re willing to take it to give you the opportunity to have this hands-on experience with characters you’ve seen a hundred times (and hopefully a few you’ve never met) in a new world of your choosing.

1. I am a Shakespeare scholar.
– As if! Probably no more or less than you. When I got stuck, which was frequent (see ‘yarn’ above) I had the internet at my immediate disposal. Can’t remember a scene that has pirates? Need another reference to a horse? I’d like to particularly thank MIT for their free on-line posting of all of Will’s work.

2. I LOVE Shakespeare.
– Again, probably no more or less than you. Having irreverence towards the text was crucial in this process. But so was loving his words. I have my favorites (most of which found their way into the final draft) and anything I didn’t think would make you either laugh or cry was cut.

3. Two of the actors have webbed toes.
– It’s just not true.

Shakespeare invented the word ‘laughable’! Really! Look it up! So I take that to mean he really wanted his work to make you laugh. We hope in our hands it does. So come early and often, get a drink (or two) and tell us what you’d like to see happen next because we’re as curious as you are.