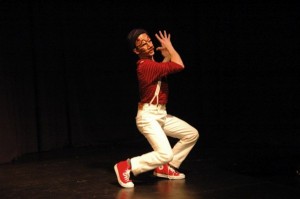 The Filament Theatre Ensemble is delighted to announce that the one and only Arlecchino has returned to Chicago! Arlecchino’s Odyssey is back by popular demand, for a limited engagement at the beautiful Den Theatre.

Rooted in the rich tradition of commedia dell’arte, Arlecchino’s Odyssey is the carnivalesque journey of one man to find himself amid the trials, tribulations and tricks of the world. Arlecchino has traveled across Europe to arrive here in Chicago to share his topsy-turvy story.

Tickets only $5! (Available at the door)

“Sade is more than just quick on his feet–he exemplifies physical comedy. Cartoon characters wish they had this much dexterity.” -Chicago Reader