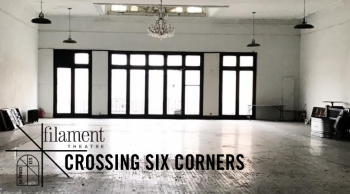 Filament Theatre joins with the Six Corners Association and the local community to present Crossing Six Corners. This theatrical patchwork canonizes the history and legend of Chicago’s Northwest Side and the historic Six Corners Shopping District. Through interviews with residents and historians, archived news articles, old pictures, and more, Filament Theatre is developing playful scenes, nostalgic monologues, and creative songs that will fill audience members with love and pride for their Chicago neighborhood.

This event was made possible by Illinois Humanities. 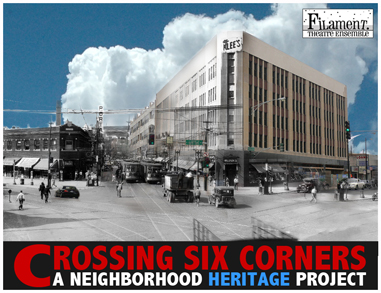 The Filament Theatre Ensemble will continue to present Crossing Six Corners: A Neighborhood Heritage Project at its new home in the Six Corners Shopping District. Through interviews with past and current residents, archived news articles, and discussions with local historians, Filament has devised an original play about the Six Corners.

“The project has turned out to be a true collaboration between our company and the community,” says Filament’s Artistic Director Julie Ritchey. “Residents have teamed up with us to conduct interviews, gather research, share neighborhood stories, spread the word about the project – everything. We’ve been absolutely thrilled and honored to have so much involvement from the neighborhood, and to be able to put these fascinating stories on stage.”

Presented in a series of scenes, monologues, and original songs, Crossing Six Corners creates a performance mosaic of the historic Chicago district. At one time Chicago’s number one commercial district, the Six Corners and its surrounding neighborhoods are full of fascinating history, from the historic Portage Theatre to the bungalow belt, to family stories of immigration, changing economic times, and more. Filament honors the heritage of its new neighborhood, and joins with the community in their dedication to revitalize the Six Corners.

Come celebrate, grieve, reminisce, and look to the future with Filament as they present Crossing Six Corners: A Neighborhood Heritage Project.