Encore! A Deleted Scene From the Circle - Filament Theatre
by Filament
with no comment
Blog

Ensemble member and From the Circle storyteller Audrey Bertaux-Skeirik shares the wonderful story of Gluskabe a Native American legend that didn’t quite make it into From the Circle: Remembering the Earth through Folktales.

Here’s a little secret. There was never a script (per se) for From the Circle: Remembering the Earth Through Folktakes. Instead, there were stories, from books, from oral tradition, from memory, from personal experience, and even from science we extracted these stories that were used in the performance. Throughout the rehearsal processes we tested out a multitude of stories that, over time, came and went, were shortened, lengthened, cut and pasted, exchanged for different versions, and ultimately fourteen stories made it to the stage.
But what about the stories that didn’t make it to the stage? Here is one that almost made it in, but ultimately was cut from the show the week before we opened. 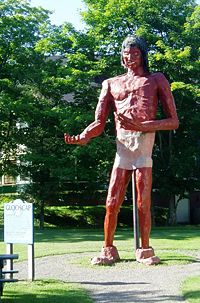 A large statue of Gluskabe beside the town hall of Parrsboro, Nova Scotia

THE CREATION OF GLUSKABE (Abridged)

When the Creator finished making the world, he dusted off his hands and from those sprinkles of dust Gluskabe formed himself. Gluskabe sat up and walked around and the Creator exclaimed how wonderful Gluskabe was!
“I am wonderful because you sprinkled me!” said Gluskabe
Then the Creator and Gluskabe walk over the whole world, exclaiming on its beauty and wonder!

It is a delightfully simple story about creation, appreciation, and wonder. But why did we remove this story? Ultimately we found that these elements were already in other stories we were telling, and although the story was interesting and engaging, it led the show to linger, rather than propelling it forward.
Gluskabe shows up in many folk tales and has a multitude of adventures, so if this deleted scene caught your attention, you may want to read more Gluskabe stories!