In today’s blog post we examine the relationship between Hank Williams and his mentor Rufus Payne, known as Tee-Tot. Hank’s problems with his back (which we will explore in Hank’s upcoming blog entry) kept him from the normal jobs that a young man living rural America in the 1940’s would have done. Since he was unable to perform labor jobs, Hank turned instead to music, and an African American street singer known as Tee-Tot is credited with teaching Hank to sing the “hard time Southern blues.” 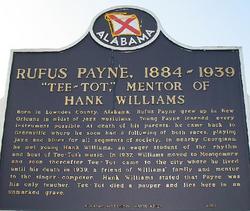 As we peruse the many versions of Hank Williams’ story left behind in interviews, biographies, educated guesswork and a few tall tales, we’re amused to find how many people from his childhood have taken credit for giving Hank his first guitar. It’s not hard to imagine why so many versions of this story are in circulation: providing Hank with the conduit for his immortal music is like playing God in a country music creation myth. We don’t know how Hank got that first guitar, but we do know where he learned how to play it. The story of Hank and his tutor, Rufus “Tee Tot” Payne, is really also a story of how country music came to be.

In the late 1930s in the small town of Greenville, Alabama, a preteen Hank Williams was living in his mother’s boarding house and slacking off at school. For any number of reasons, he couldn’t stay still: even as a youth, Hank was a drinker, probably to numb the pain of the spina bifida he’d been born with that must have made it torture to sit in a classroom. 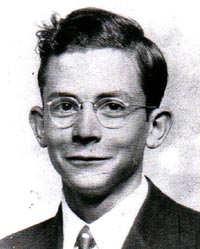 Many of the standard boy’s pastimes—the sports, the roughhousing—weren’t really an option for a kid with a bad back; many have speculated that this is one of the reasons Hank turned to music.

The South in the Great Depression was saturated with music of all kinds. The record companies split up the era’s sounds along racial and thematic lines: “race music,” or Black blues, jazz, and honky-tonk; “hillbilly” or “folk” music, sung by rural white laborers; and the newly emerging “country” sound, which was a genre manufactured for movie stars like Roy Rogers and Gene Autry. On the ground, though, “race” vs. “hillbilly” music was a much more difficult distinction to make. The blues arose through decades of Black slavery and poverty, while many folk songs had ancient European roots and had been preserved in white hill communities—but music is perpetually evolving, and there was a great deal of cross-pollination across regions and races. Poverty tends to equalize in certain ways, and especially during the Depression poor people shared campfires and shanty towns and bars, and they absorbed one another’s musical styles.

Not much is known about Tee-Tot, historically.  It’s said that his nickname is a reference to “teetotaler,” and that he always carried with him a mixture of alcohol and tea.  His mother, father, and birth date are not listed on his death certificate, and his death is simply listed as “unknown.”  But his musical legacy speaks for itself: Hank was always open in crediting Tee-Tot with teaching him music, even in that time of racial divide.

The dramaturg of Hank Williams: Lost Highway, Kati Sweaney, created a playlist of music similar to what Hank would have listened to when he was growing up.  For more musical context, you can find that playlist here. 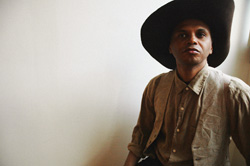 And now, ladies and gentlemen, we’d like you to meet Gerald Richardson, who plays Tee-Tot in Hank Williams: Lost Highway.  Gerald blows the roof off on stage with his powerful voice, and is a joy off stage as well.

What are you most excited about for this production?
Gerald: Putting all the pieces together and watching it grow.

What made you want to be part of this production?
Gerald: I loved the story, and being a southerner I grew up hearing this music throughout my childhood, so that is exciting.

If you could see any musician perform, living or dead, who would it be?
Gerald: Elvis Presley

Are you similar to Tee-Tot?
Gerald: Yes.  I love the blues and was raised in a southern baptist church.  Gospel and blues were always being sung when I was young!

One of Hank’s biggest struggles was the idea of “success” – he made it to the top, but found that once he was there he was still lonely and unhappy.  How do you define success for yourself?
Gerald: Success is being confident and happy in whatever you do.