Living the Story - Filament Theatre
by Filament
with no comment
Blog

“Choose Thine Own Adventure” actor Marco Minichiello shares his thoughts about the relationship between performer and audience, and why Shakespeare still connects to modern audiences.

I often view theatre as an allegory for community. I am not speaking of specific play, playwright, or sequence of scenes, but rather the literal act of theatre. In the abstract it stages (quite literally) how life should be lived – with an ongoing effort to understand each other and ourselves; and that such a project is best undertaken with a community of people. After all, theatre is a shared experience; it is a conversation between the audience, the actors, and the characters they portray. Even when an audience seems to simply sit for two hours to watch a story, they are lending a crucial voice, because they are living it. “All the world’s a stage” after all. I think this reality is what has always drawn me to acting, and Shakespeare in particular. 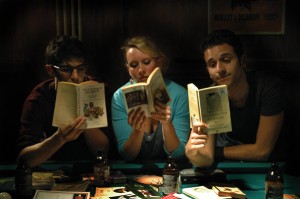 For all its beautiful poetry and dramatic storylines, Shakespeare is about human beings. At its heart, Shakespeare’s plays give us a truly unique window into the self. Oftentimes, they even directly confide in us: Hamlet shares his contemplation of suicide; Macbeth wrestles with his reticence to kill a dear friend Banquo. Like anyone, Shakespeare’s characters are struggling to find out who they are, what they want, and how to make sense of the world in which they live – and they do it in big, memorable ways. “To be, or not to be.” “Now is the winter of our discontent.” “Tomorrow, and tomorrow, and tomorrow.” I am often reminded, performing Shakespeare, that we all live lives such as Hamlet, Richard III, and Macbeth. For his characters reveal themselves to be just like us. They live hard lives, full of mistakes and pain, joys and triumphs.

“Choose Thine Own Adventure” takes these tenets and raises the volume, so to speak. Not only is it Shakespeare, beautifully spoken, poignant, and raunchy, but it is a breathing, living piece of theatre (I recently learned that there are over 20 different permutations of our script!)

As actors we are often taught to live in the moment. However, that is the very thing I personally find most difficult – the constant strive to discover the freshness in a scene I’ve rehearsed for several months, performed for several more. As the character, it is happening for the first time, yet how can I, as an actor, view it as new if I already know what I will say next, when I will sit down, or take a drink? Well one way is if you, the audience, decide which storyline will unfold each night! While we can rehearse all the scenes, we cannot possibly rehearse every storyline permutation, or the dialogue between actor and audience. This is exciting. It is the literal embodiment of actor, character, and audience speaking to one another – and listening! Through this dialogue we are collectively mapping out and living a story. One that is unique to that night. Another cool part is that the show literally takes place in a bar (yes there is a stage!). What better venue to share stories, laughs, and heartache?

It’s been thrilling to be a part of the process thus far, and work with a text that brings freshness not only to Shakespeare, but also to the very act of theatre. Plus, I get to speak many of Shakespeare’s great lines which I’ve never gotten the chance to perform before. Oh, and I get the balcony scene from Romeo and Juliet – how cool! We have only reached the one week mark of rehearsals, but already I’ve learned so much. The cast and crew is incredibly diverse, and it shows in the personalities and ideas thrown around the room each night. The show would not be the same if one person were different. I can’t wait to show off what we’ve cooked up, and I’m not entirely sure what that will be until we create it with all of you!