We continue our on-going blog series on the life and music of Hank Williams and our production of Hank Williams: Lost Highway. In this post we are excited to introduce you to the actors that make up Hank’s band, The Drifting Cowboys, in our production. Join us next time as we examine Hank’s fans and why he made such a splash when he arrived on the music scene of the 1940’s. 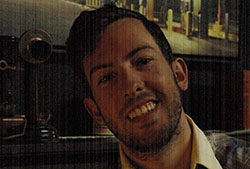 Sam Quinn plays Jimmy, the lead guitarist of the Drifting Cowboys.  Called “Burrhead” by Hank and the rest of the band, Jimmy is the most easily fed up with Hank’s bad behavior and mistreatment of his friends.  Sam, a top-notch gentleman and fantastic musician, is a Chicago transplant originally hailing from the mountains of northern New Mexico. Since moving to Chicago Sam has performed with several local theatre companies, including Redmoon, Collaboraction, and Trap Door Theatre. For the last year his focus has been centered around developing and workshopping his original rock musical, EYE iNSIDE: The Rock-N-Roll Allegory of Vance Barrett.

What aspect of Hank’s story do you most identify with?
Sam: Hank just wanted to be a good songwriter.  That’s just how I feel about every day.

What are you most excited about for this production?
Sam: I’m stoked to call myself a lead guitarist, and just as nervous.

If you could see any musician perform (living or dead), who would it be?
Sam: I’d see Jim Morrison in his prime.  He seems electrifying to me…  Tom Waits is a close second.  Waits always seems like the music is controlling him, and not the other way around.

What artist inspires your work?
Sam: John Cameron Mitchell, the songwriter and playwright of Hedwig and the Angry Inch.  He proved that musical theatre could rock. 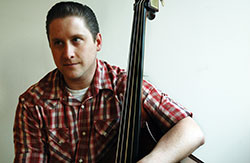 Jesse Woelfel plays Hoss, Hank’s bass player and most loyal friend.  Jesse fell out of bass-player heaven and into the cast, after performing as the bass player of Million Dollar Quartet for a number of years.  Growing up in Northeastern Wisconsin, he only heard music from the 1950′s and 60′s because his father never changed the radio station from the ‘Oldies’ channel. His Grandfather played a pivotal role in his life by introducing him to the music of Hank Williams. Currently, he plays with the bands The Black Willoughbys and Pearls Mahone and the One Eyed Jacks.

What made you want to be a part of telling this story?
Jesse: Hank Williams was a favorite of my grandfather and he introduced me to it a number of years ago. Unfortunately, he passed away, so I guess it is a way of reconnecting with him.

If you could see any musician perform (living or dead), who would it be?
Jesse: Django Reinhardt, Bob Wills and the Texas Playboys, Cab Calloway, Les Paul, Hank Williams, Johnny Cash, and The Clash. I would have loved to see these people because of the way they shaped and changed music.

What’s your favorite Hank Williams lyric?
Jesse:  It’s from “Angel of Death” – I’ve had an affinity for this song for a number of years.  “The Angel of Death will come from the sky and claim your poor soul when the time comes to die.”

Eric Labanauskas appears as Leon, called “Loudmouth” by Hank and the band, the taciturn fiddle player.  No stranger to the Musicians-Biography-As-Stage-Musical concept, Eric spent a number of years traveling around the country as Buddy Holly in The Buddy Holly Story.  But now he’s trading in those trademark coke-bottle glasses and guitar to pick up the fiddle again – an instrument Eric has studied for over 18 years!

One of Hank’s biggest struggles was the idea of “success” – he made it to the top but once he was there, he was still lonely.  How do you define success for yourself?

Eric: Best I’ve heard it summed up comes courtesy of Lyle Lovett: “Success is getting to do what you love to do.” I think folks often shortchange themselves, and what seems like a small accomplishment – if one at all – is a mighty one.

If you could see any musician perform (living or dead), who would it be?
Eric: I never, ever, in my life thought I’d get as caught-up with Elvis as most the rest this country has seemed to. And then I made the trip to Memphis, and – of course – our first stop? Graceland. Walking out of there, I don’t think I can say I’ve looked at music the same way, ever again. Here was a guy doing something so new, so raw, so energetic…that would spring a country forward into the last half of the twentieth century. He was Rock, Roll, all of it. A good ‘ol boy. American to a “tee.” If for nothing else? Buddy Holly decided he wanted a career in Rock ‘n Roll after seeing Elvis perform. I’d simply want to go and see for myself what all the fuss was about.

What artists inspire you in your work?
Eric: Guys like Hank influence me. Or Buddy. Or Dylan. Or Johnny Cash. They took simple chords and transformed them with their words, singing them only like they could.  Their brilliance makes them musical legends, but their honesty makes them accessible, and I think that’s more important than anything in good music.

Is there a song that has special significance for you?
Eric: Whenever I’ve a quiet evening to myself  I’ll pop-on Buddy Holly’s “Apartment Tape” recordings. These weren’t known to the rest the world until they were released, posthumously. They’re as simple as can be: Buddy singing while backing himself on an acoustic guitar. The voice is the same and so is the simple chord structure, but there’s an emotional complexity that gets me every damn time.

What’s your favorite Hank Williams lyric?
Eric: “Did you ever see a robin weep/when the leaves begin to die/that means he’s lost the will to live/I’m so lonesome I could cry”

And last but certainly not least, Tim McNulty plays Shag, the Drifting Cowboy’s steel guitar player – giving Hank that signature country sound.  Born in Vermont and raised in upstate New York, Tim has played many different instruments in many different styles – including punk rock, spiked hair and all.  During college, he wised up and finally ‘went country.’ After soaking up some genuine honky tonk sounds and working as a barbecue cook in Austin, Texas, he moved back north to Chicago in 2009. He currently plays guitar and sings for The Black Willoughbys, a Chicago- based Country/Americana band, and is studying steel guitar with local veteran Ken Champion.

What aspect of Hanks story do you most identify with?
Tim: I’m always inspired by the sort of mythic arc of his life — it’s the stuff of great novels. These days it reads like a cliche, but for him it was real: A man seemingly emerges from nowhere with guitar, songs and rugged voice that rattles the floorboards loose and takes no prisoners. Everything about country and pop music changes after Hank. Everything.

What are you most excited about for this production?
Tim: Shit-kickin’ boots and pearl snap shirts!

If you could see any musician perform (living or dead), who would it be and why?
Tim: Impossible question. But, at this moment, I’d pick Billie Holiday. Because, she’s Billie Holiday.