It’s tech week for Choose Thine Own Adventure! Yes, tech rehearsals are long and arduous, but thank goodness we have actor Ped Naseri to keep us laughing with his Elizabethan stand-up.  This week in the Filament blog, Ped shares his philosophies about the Bard and Dirty Jokes.

The Equation of Comedy

I imagine if William Shakespeare was alive today he’d be a fan of the show Yo Momma. Why? Because of his wit and penchant for insults — two talents you must have in order to win cash maaaahney or become the greatest playwright in the English language. Consider for a moment some of Shakespeare’s zingers (which you can hear during our show!):

“Peace, ye fat-kidneyed rascal!”
“She’s the kitchen wench and all grease.”
“Asses are made to bear and so are you.”
“A witty mother witless else her son.”

If that ain’t old school trash talking, I don’t know what is. (Maybe Chaucer, but he’s pretty lame.) Anyway, what people sometimes forget and high school English teachers downplay for fear of book- banning, is that Shakespeare was really funny and often times went blue. Although way more eloquent, Shakespeare made a lot of dirty jokes. There’s something to think about — how eloquent can a dirty joke be? As it turns out, very much so. Academics call them double entendres, innuendos, or ambiguous puns, but a dick joke by any other name is still as funny. 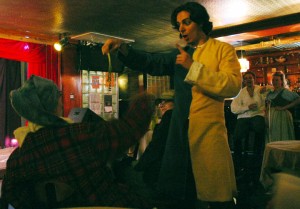 What I’m driving at is that not only was Shakespeare’s language beautifully poetic, highly elevated and imaginative, it was also freakin’ funny. I’ll be the first to admit that it’s sometimes hard to catch the punch-line (they say that if you have to look up a joke it’s not funny anymore, but let me assure you that lexicons make them even funnier –(thank you Alexander Schmidt!). Nonetheless, it’s easy to get wrapped up in all the other important Shakespeare elements that one can forget just how witty and humorous it can be. In our show, I think we’ve found some creative ways to bring out the comedy in a mash-up, remixed — and for the nerds — a re-contextualized way. And that the audience gets to help decide which direction they want the show to go all adds up to one heck of a bergamask-inducing time.

I guess that means I should amend my original formula to this: Comedy = tragedy + deez nuts.