So… those creepy clown things in ORPHEUS: Featuring DJ Puzzle as Fate…  Who are they? What are they thinking?  Where do they come from?  Well, here to answer all your questions is Filament’s literary manager and Bouffon Extraordinare, Jack Novak.  And now that you have all the inside scoop, come see Jack for yourself in ORPHEUS on Fridays and Saturdays through May 29. Click HERE for more information. 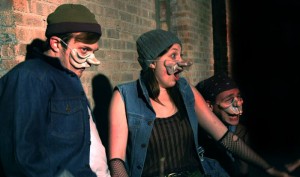 In ORPHEUS: Featuring DJ Puzzle as Fate, we have stripped away many of the myth’s traditional elements. As substitute for the destructive forces of the story – the serpent which kills Eurydice, Hades, and the Maenads who ultimately tear Orpheus apart – we have put in place three bouffons. In our production, these disfigured and slightly mysterious beings are denizens of the underworld, who come to the club to wreak havoc on Orpheus, his bride, and the world of light.

For those less familiar with the intricate pedagogies of physical theatre, the bouffon, in its most contemporary sense, is a term devised by French actor and teacher Jacques Lecoq. I’m not qualified, nor do I have the time or patience, to write out a background on Lecoq here, but I would recommend a quick trip to Wikipedia if you’ve never heard of him. However, to give you a basic idea, bouffon is one of Lecoq’s dramatic territories – a sort of archetype, like clown or Commedia. Some precursors to Lecoq’s concept of the bouffon include the court jesters of the European monarchs – who were given the privilege of freely criticizing or mocking the people of the court, to provide entertainment or insight, like the fools of Shakespeare’s plays – as well as the satyrs of Greek mythology and the grotesquely parodic satyr plays of ancient Greek and Roman theatre (and coincidentally, one version of the Orpheus myth tells of Eurydice getting bitten by the venomous serpent while fleeing a satyr). Similarly to the satyrs and royal fools, the bouffon’s central characteristic is its instinct to mock everything around it. Lecoq writes in The Moving Body, (his book on his methods of instruction) “Their function was not to make fun of a particular individual, but more generally of everyone, of society as a whole. Bouffons enjoy themselves, for their whole life is spent having fun imitating aspects of human life. Their great delight is to make war, fight, tear out each other’s guts.” Yes, the bouffon relishes in destruction as well as basic mockery, and in our production, the bouffons do a lot of damage – we mangle a beautiful flower, we tear apart a star-crossed love, and we dismember the greatest musician of all time. It is this destructive quality of the bouffon that often puts the word “evil” in the audience member’s mind, and with good reason, but I question – are the bouffons really evil?

My Orpheus cast-mates and I had generally sparse experience with the concept of bouffon, and even our fantastic director & Filament Associate Artistic Director, Omen Sade, who commands a deep understanding of physical theatre (the phrase “master comic” has been bandied about here and there), admitted to us from the beginning that his knowledge of bouffon, specifically, only went so far as he had read about it. So we embarked on a journey of experimentation, and what we ended up with is really a unique fusion of Commedia-style mask work, clown, grotesque, and Mime, all overlaid with the philosophy of the bouffon as we understood it. I did come into this process with a little bit of physical theatre training – a lot of Mime, some red nose clown, neutral mask, a smidge of Commedia – but my only knowledge of bouffon was 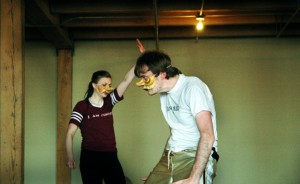 a brief mention on the last day of a clown workshop with Giovanni Fusetti (a Lecoq-trained pedagogue himself). He had a group of us do a very basic exercise, in which we clustered onstage and went from audience member to audience member, singling each out by pointing and laughing cruelly. On our first day of Orpheus workshops, Omen had us play out part of the story in extreme grotesque parody. So I started to construct an understanding of the bouffon psychology, and one of the most immediately distinct things about playing this way was how much fun it could be. Lecoq writes, “No one is more of a child than the bouffon and no one is more of a bouffon than a child.” The parody that the bouffon creates is not highly intellectual – there’s no elegantly constructed satire here – it is more like the playground antics of a group of children, and opening myself up to that experience invoked a kind of pre-adolescent delight. What makes the bouffon really hard to watch, though, is that they bring this type of play to the realm of tragedy. So, in contrast to the fun one has inhabiting the bouffon, is the experience of looking up to the audience, expecting to see them laughing along with you, and seeing instead looks of disgust.

A funny thing about working on a devised physical theatre piece like this one is that the traditional rehearsal process gets flipped. Instead of starting with text work and extended thought about motive, objective, subtext, etc., we constructed this story from the outside in – beginning with isolated physical bits, slowly fitting them together into an arc, and finally examining the internal specifics of the characters. As such, it wasn’t really until a couple weeks ago that someone actually asked, “why do the bouffons want to destroy Orpheus?” We had taken the goal of destroying Orpheus for given, and hadn’t completely examined how the bouffons fit precisely into our telling of the story. We did have design concepts from our costume designer, Mieka van der Ploeg, which characterized the bouffons in this club world as a gang of neo-punk nihilists (and a particularly astute parallel pointed out by one of my cast mates is the group of nihilists in The Big Lebowski). That wasn’t something we really excavated until this late point in the process, but it is immanently clear that bouffons, when placed in the same space with non-bouffons, become societal outcasts, which fits beautifully with the nihilist archetype. Meanwhile, Orpheus is the very epicenter of society, of light, of love, of music. Omen noted a parallel between our bouffon and Dante’s vision of Satan – in the Inferno, Hell is the crater formed by Satan’s epic fall from grace, and Satan sits at its center, which is the very point of greatest distance from God’s love. To draw another parallel, for Dante, God’s love was embodied by the sun, and Orpheus is the son of Apollo – the Greek god of the sun. The bouffon, particularly our lead bouffon, (essentially Hades) played by Lindsey Dorcus, are people who are devoid of love, like Dante’s Satan. When they look in on club Dionysus, and see the Nymphs in their joyous revelry, and see Orpheus wrapping up the crowd in ecstatic worship, they do not understand it. In fact, it is so far from their understanding that, to them, it is completely stupid, and they are compelled to show the crowd how idiotic it all is. In particular, they want to show everyone that Orpheus is a fool, which ultimately means reducing him to ruin. Here’s another Lecoq quote: “In their rituals, bouffons do not invoke heavenly powers, they spit on them! They invoke earthy forces; they are on the side of the devil and the underworld.” One of the objectives our bouffons enter this story with, aside from destroying Orpheus, is to turn club Dionysus into club Underworld. You’ll have to see for yourself if they succeed. 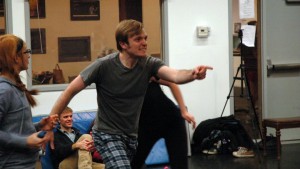 Will the bouffons disgust you? Probably a little bit, but they might also fascinate you, and as we’ve been getting new audiences into the club, the bouffon have, I believe, managed to bring some guests to their side, if only for a moment. There’s even a laugh here and there. Are the bouffons evil? If evil means malevolence, destruction for the sake of destruction, ill will born of irrational hatred, then I would say no. They simply have no way of interacting with society other than to mock it. Lecoq, again, probably never intended this kind of realist speculation, but as an actor I ultimately decided (and again, this came at the very end of the process – during previews, in fact) that I needed to understand a little more about my bouffon’s origin. I won’t divulge too much, as it’s mostly irrelevant, but I asked myself how a person in the real world might come to have such an aversion to society, and I thought of someone who has been confronted by extreme loss – the death of a loved one – and who is thenceforth unable to understand joy in the world. When Orpheus sings his song of loss to the denizens of the underworld, my bouffon experiences empathy for one brief moment, as he realizes he, too, has felt the pain of such a loss. So, hate the bouffons all you want – spit on them, be disgusted by them, heckle them (and expect us to heckle you back) – but please, don’t call them evil. Have some sympathy for the bouffon.