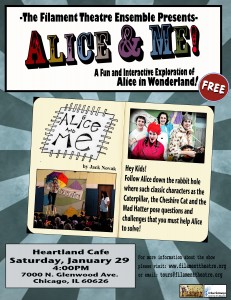 Last month, as a part of our monthly community performances, we traveled to the Magic Tree Bookstore in Oak Park.

Join us for our next community performance!

We offer these community performances free of charge as a way to share the experience of live theatre with families throughout the city. Alice and Me! is also performed at Chicagoland schools in partnership with Urban Gateways: Center for Creative Arts. Please contact tours@filamenttheatre.org to find out more information about booking Alice and Me! at your school or in your community.

School performances include study materials that can be applied to all elementary levels. They emphasizes all learning styles in a fun and interactive way that will get your student excited about learning. Our performance and all of the educational materials are created in conjunction with the Illinois State Learning Standards, accomplishing learning goals such as, critical thinking, trial and error, problem solving, making positive choices and learning behavior that benefit themselves and the community.

Alice & Me! is a great experience to share with your whole family and is geared toward Elementary grade students.

Filament Theatre Ensemble is proud to be partnering with Urban Gateways on our new adaptation of Alice & Me!, an interactive re-telling of the story of Alice and Wonderland.

As part of our ongoing Community Building Campaign we are offering a FREE public performance:

The Magic Tree Bookstore
Sunday, December 12 at 3PM
141 N. Oak Park Ave.
Oak Park, IL 60301
We would love to invite you to this production of Alice & Me! as an introduction to this exciting new school tour.

Follow Alice down the rabbit hole where such classic characters as the Caterpillar, the Cheshire Cat and the Mad Hatter pose questions and challenges that you must help Alice to solve.

Alice & Me! is a great experience to share with your whole family and is geared toward Elementary grade students. 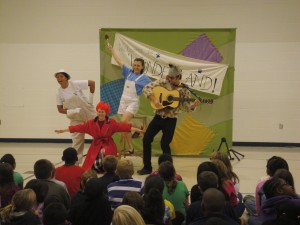 This week on the Filament blog, artistic director Julie Ritchey looks back at this week (in which the Filament Theatre Ensemble opened three world-premiere plays) and looks forward to tonight (the opening of Choose Thine Own Adventure)!

When it rains it pours, they say, and what an appropriate adage for today! Not only are we edging into autumn with one of those classically cozy rainy Chicago days, but we at Filament are arriving at the end of an epic week of shows. It’s been a unprecedented week here for us. This week has marked the world premiere of THREE Filament shows.

We started the week off with our very first performance of Alice and Me! in Monee, Illinois on Monday. By Friday, the actors had performed the show seven times, reaching over 2100 students in the

The First Performance of Alice & Me!

Monee school district. I have to take a second to applaud the actors’ energy and focus (especially considering they’d been waking up at 5:30 a.m. five days in a row!) to be able to match the energy of an entire gymnasium of elementary school students. I wish you could have seen them! As Peter put it, it felt more like a rock concert than a play. The kids were so invested in every moment they could hardly even stay still. My favorite moment would have to be when Mary as the Red Queen challenges Alice (played by Melissa Law and Lauren Malara) to a game of croquet and then never lets her have a turn. The kids went wild defending Alice, yelling that it was her turn, that the Queen was cheating, that it wasn’t fair. A baby riot was narrowly averted! It was so refreshing to see an audience so personally invested in a story that they couldn’t help but yell out in defense of one of the characters. That was our hope and it seems to be working. As we move forward we will take what we have learned and continue to refine the experience that we are bringing to these schools. Jack, the playwright and an ensemble member, has really written such a smart and wonderful play – one that connects to an enormous age range on so many different levels. I’m already looking forward to the next booking!

This afternoon, Omen Sade and Mary Spearen are heading up to Wauwatosa, WI to perform the world premiere of Arlecchio for Kids, a complete re-imaging of Omen’s one man show The Odyssey of Arlecchino, which premiered at the Theatre Building Chicago in February.  As I write this, they are midway through the performance!

Our audience for the preview!

And tonight at 8:00, Filament officially kicks off its fifth season with the world premiere of Choose Thine Own Adventure at the Underground Lounge in Wrigleyville. We had our first preview last night, and it couldn’t have been more fun. Since the entire show is contingent on the audience, it has been a pretty non-traditional rehearsal experience, but as you can imagine finally having an audience added that last element that really makes the show what it is. It was such a joy to, for the first time ever, have that last piece of the puzzle in place.

Tonight is our official opening night, and it’s very likely that we will be performing a completely different play than we did last night! I have no idea what the audience will vote for, and therefore no idea what I’ll be watching tonight. Is it 8:00 yet? I can’t wait!