The Producer's Curse - Filament Theatre
by Filament
with no comment
Blog

Actors aren’t the only ones who get opening night jitters.  Managing Director Christian Libonati gives us a look at Choose Thine Own Adventure’s opening night from the eye of a producer – the worry, joys, stresses, and gifts of producing a show and seeing it performed in front of an audience (of reviewers, no less!) for the first time.  Choose Thine Own Adventure resumes performances this weekend after a break for the Thanksgiving holiday; only four chances left to see this hit show! 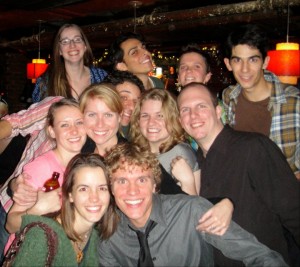 Christian (front) and the Choose Team on opening night.

We are rapidly approaching the final performances of Choose Thine Own Adventure. As we do, I find myself thinking back almost 2 months to our opening performance. Although I have been Managing Director of Filament for the past four years, it has been three years since I have been able to attend an opening night. The past two years I’ve found myself speeding away from our theater an hour prior to show time to try and make it for a half hour call for another show in which I was simultaneously performing.

But this year on opening night, after the house was open, the tickets had been collected and the audience had found their way to a seat (we over sold opening night, so the place was jammed), I nervously moved to the back of the house to watch the show. As the first sound cue brought on the actors, I had the realization that there was nothing more I could do… this could have created a sense of inner peace, a sense that I had done all that I could do to bring this four year old vision of Choose Thine Own Adventure to life; however, instead all I could do was sit and worry about how the reviewers would react to the show (reviewers and their guests made up almost a third of the audience!). It was hard for me to watch the show, I found myself shaking, pacing, and at one point I even had to sit down on the floor. It wasn’t until maybe two hours after the show had ended that I was able to relax and enjoy our opening night. But I suppose this is the producer’s curse… the great fear and anticipation of what the reviewers will say and how that will affect audience turnout.

Little did I know that the anticipation had only just begun. When I woke up the next day, all I could do was sit at my computer and continually search and refresh: “review: Choose Thine Own Adventure.” What are they going to say??? Will they love it? Hate it? Or, worst of all, feel indifferent to it?

The first review to surface was Around the Town Chicago with Al Bresloff. “Part of what “Adventure” does is make viewing Shakespeare an adventure itself.” I felt a huge sigh of relief. He got right to the heart of the piece. Someone may ask: ‘Why mess with Shakespeare? He doesn’t need your help to write a brilliant play.’ To that I would say: you are absolutely right! Shakespeare’s plays are some of the most remarkable plays ever written; however, he has tragically acquired a bad rap among my generation, so we set out to shake up the lens through which our audience would view Shakespeare, and, well, we wanted to make viewing Shakespeare “an adventure itself.” One down.

Next came Tom William’s review from his website: Chicago Critic, as well as Lawrence Bommer’s review for Steadstyle 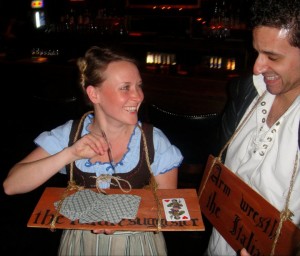 Actors Mary and Marco during the pre-show.

Chicago. Mr. Williams identified another one of our goals: to appeal not only to “Shakespeare nerds” but also to “beer drinking rowdies and lovers of hilarious live comedy.” Ironically, the way we are able to connect with all these crowds is by staying as true to the Shakespeare text as possible! As Mr. Bommer graciously said: “They clearly love the author whom they eloquently honor with recitations that can hold their own on Navy Pier or Dearborn Street.” (I’m going to include that little snippet when I invite Barbara Gaines to our show…)

Another fear I had was bringing a bunch of Chicago theatre reviewers (many of whom are not necessarily our target audience where age is concerned) to a dark, seedy, Wrigleyville bar. An atmosphere usually reserved for stand-up comedy and heavy metal bands. But, Neal Ryan Shaw allayed my fears in his write up for New City Stage when he wrote: “…the dingy bar is nearly perfect, in fact, giving us the freedom to interact with the players and even sneak off to the bar for a refill…”

I want to take a step back, and comment on how the reviewers depicted the actors. Each actor was called out in at least one of the reviews for a funny moment they had or for general ease with the text or connecting with the audience; however, my favorite description of an actor was when Omen Sade was referred to as “the show’s second banana.” After reading that, Omen was quick to let me know that if the reviewer had attended a different night and seen a different track of the show, he would have been the first banana.

Finally a week after opening, the Tribune review was posted. As Scrooge says to the ghost of Christmas Future, this was the spirit I feared most of all… What would Nina Metz of the Tribune say?? Well, she had some very nice things to say, and I was thrilled by the review and how she compared our show to “a better episode of 30 rock.”

All of these reviewers saw that opening night performance, but as Ana Klinchynskaya of the Chicago Maroon observed, “How do you write a review for a show that changes every night?” So, I was very excited when she walked into the bar to review a performance in our third week. This review has some of my favorite quotes, and hit on so many of the key, exciting elements we set out to convey. You can imagine my surprise and delight at reading this college reviewer’s sub headline: “Filament Theatre’s Choose Thine Own Adventure improves Othello & others…” This is a student from the University of Chicago who didn’t seem to be a huge Shakespeare fan, but from her experience at the show, she observed: “Filament Theatre breaks down this barrier violently, rowdily, bawdily, and amusingly to create a performance that the audience can both participate in and relate to.” She went on to give us the greatest complement we have yet received, implying that we created this show “just as Shakespeare would’ve wanted it.”