The Van Gogh Cafe,
a story in 5 courses.
The Magic Returns March 2017 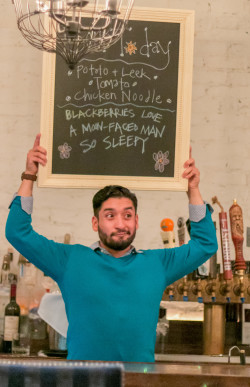 Join Filament at Fannie’s Cafe for a magical mix of food and theatre!

Price: $45 for adults, $30 for children/students (price includes a prix fixe menu inspired by the story). Gratuity is additional.

“… magic enough to last forever in its walls”

Ten-year-old Clara knows that anything can happen at the Van Gogh Cafe, a small roadside diner owned by her father Marc.  At the Van Gogh Cafe, it’s not a question of if magic will happen — but when. This unique experience puts the audience right in the middle of the magic cafe.

Cynthia Rylant (Author) is the author of more than 100 books for young people, including the beloved Henry and Mudge, Annie and Snowball, Brownie & Pearl, and Mr. Putter & Tabby series. Her novel Missing May received the Newbery Medal. She lives in Lake Oswego, Oregon. Visit her at CynthiaRylant.com.

Andrew J. Lampl (Playwright) is thrilled to be partnering with Filament Theatre to bring The Van Gogh Café to life! Previous writing credits include Richard Wakes Up, Water Evacuation, Flood, and Sorry Charlie. Next up: an original musical about the life and times of Batman. All the love to my wife and writing partner Melissa.

Fannie’s Cafe (Food Design) It is the mission of Fannie’s Cafe to promote craft and community through art, events, food and outreach with care, thoughtfulness, and positive energy for everything we create and everyone we encounter.

Noël Huntzinger* (Costume Designer) is a resident artist at Filament Theatre where she has designed Pinocchio: A Folk Musical, Fog Island, Hank Williams Lost Highway and others. She is an artistic associate at Sideshow Theatre (Stupid F****** Bird, Antigonik) and Interrobang Theatre Ensemble (Still, North Pool, Pitchfork Disney and others). Noël has designed at The Goodman (New Stages Play Festival 2016), Muse of Fire, Two Pence Shakespeare, and Shattered Globe. In addition to theatre, she has designed for Chicago choreographers Ginny Sykes (Bodies of Memory), Wendy Clinard (Watershed). Noël wrapped her first film design- ‘Olympia: an Instruction Manual’ in the summer.

Lindsey Dorcus* (ensemble) has been a Resident Artist at Filament for five years, where she most recently appeared in Fog Island, The Monster in the Hall, and Cyrano.  Other local credits include Rosalind Franklin in Photograph 51 with 20% Theatre (Jeff Recommended), a tour of Lula del Ray with Manual Cinema, and work at Strawdog, The House, Lifeline, The Building Stage, Links Hall, Stage 773, and others.  Lindsey also is a proud Company Member with Barrel of Monkeys, and you can often find her in their Monday night revue, That’s Weird, Grandma!

Aissa Guerra (Clara) is so excited and grateful to work on The Van Gogh Café. Aissa fell in love with acting in kindergarten upon seeing her sister perform. She debuted as “pig”, worked her way up the animal kingdom, making her performance as “Scared Girl #2” at age 10 a joyous accomplishment. She studied theatre at Northwestern University. Recent Chicago acting credits include: Green Sherlock inSherlock Holmes and the Mystery of Portage Park and Constance in The Princess, the Minstrel, and the Rabid Bat. She dedicates her performances to her family, boyfriend, and friends for supporting her.

Alex Ireys (ensemble) is excited to be working on his second project with Filament Theater after his role in Sherlock Holmes and the Mystery of Portage Park earlier in the season. Alex got his BFA in theater performance from Virginia Commonwealth University and recently graduated The Second City Conservatory. He would like to give many thanks to the wonderful people who run Filament, his friends and family, and most importantly all the people who have made him coffee during rehearsals.

Kristina Loy (ensemble) is excited to be back at Filament for Van Gogh Cafe. She was last seen in Sherlock Holmes and the Mystery of Portage Park. Before that, Kristina worked with Lifeline Theatre on Miss Buncle’s Book. She was an Artistic Intern at the Milwaukee Rep for their 2014-2015 Season. Her credits there include: after all the terrible things I do, Harvey, and Peter and the Starcatcher. Kristina received her BFA in Acting from the University of Illinois. Credits there include: 9 Parts of Desire, 44 plays for 44 Presidents, Kabuki Lady Macbeth, and Cabaret.

Rejinal Simon (ensemble) is stoked to be playing with Filament Theatre. Most recently he was seen in Evanston in Muse of Fire’s ensemble directed A Midsummer Night’s Dream. Around Chicago, Rejinal has performed in I and You (Redtwist Theatre), Hamlet (MOF) & Moon Shot (Theatre Unspeakable). Regionally, he’s performed with Cleveland Playhouse (Cleveland, OH) and was seen in StageOne Family Theatre’s world premiere of And in This Corner… Cassius Clay (Louisville, KY) by Idris Goodwin.

The Van Gogh Cafe is performed with special permission from Houghton Mifflin Harcourt. 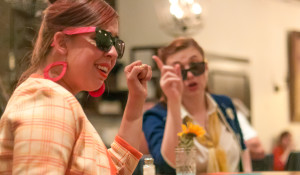 “READER RECOMMENDED. [Filament Theatre] set a high bar with this five-course “culinary immersion experience” delivered together with a 90-minute adaptation of Cynthia Rylant’s book about miracles cropping up in a midwestern diner… Magical!” – Chicago Reader

“HIGHLY RECOMMENDED. Director Julie Ritchey, using Andrew J. Lampl’s concise and clever adaptation, cooks up magic in the Community and wonder in us… To transform a restaurant into a theater (in a story about a theater that has become a restaurant), Ritchey cultivates a playfulness, sweeping us along as benevolent possums dangle from the light fixtures and wayward seagulls snatch up our pita bread, as the cast creates epic spectacles though the simplest of devices… You feel welcome, well fed in body and soul, and a part of a bright and shining world that is nothing short of magical.” – Chicago Theatre Review

“With entertaining and fortifying theater like this, wish upon a “The Starry Night” that the café will have a magical revival.” – Edge Media Network

“This Filament production was one of the most magical evenings I have ever spent in the theatre. I am thrilled it is coming back!” – Rives C.

Audience response from our 2016 production:

“The show was outstanding. My 6 year old daughter smiled through the entire performance. Definitely exceeded my expectations.” – Audience Member

“Loved the evening – it was delightful.” – Peggy T.

“It was engaging and unique experience for the family. We especially enjoyed that it was children – friendly.” – Annie W.

“It is amazing how the actors were creatively placed throughout the restaurant to accommodate all of the audience. The story is so engaging, and the audience certainly participated, i.e., napkin doves. The food was fantastic, again creatively prepared and served, comfortably filling. Please make lunch/dinner theatre productions more frequently. Thank you for bringing a bright star to our neighborhood.” – Del Norwood

“It was a wonderful afternoon exposing my 12 year old son, and my 70 plus year old mother to local theatre in a new form. Combining the Filament actors with this director Julie Ritchey, who we’ve enjoyed in the past, and adding the food and ambiance of chef Joey Beato, made for an afternoon that me and my family discussed often. We will be back to both- the theatre and restaurant.” – Cheryl Strzechowski

The full menu is directly out of Fannie’s kitchen! 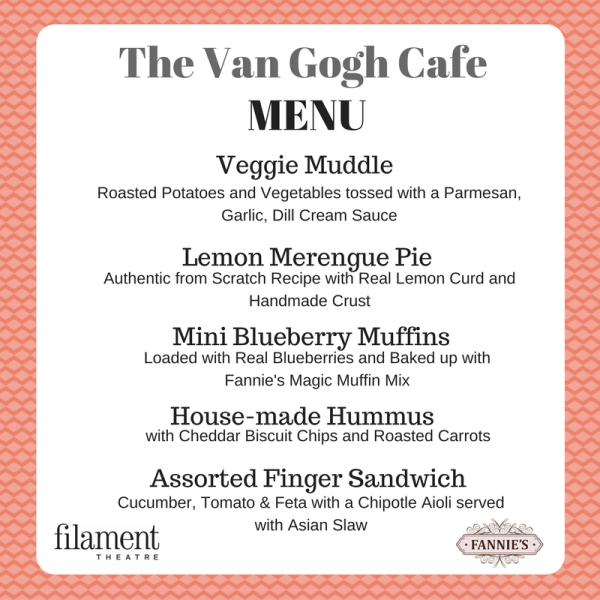 The original production of The Van Gogh Cafe was featured in Forbes Magazine. 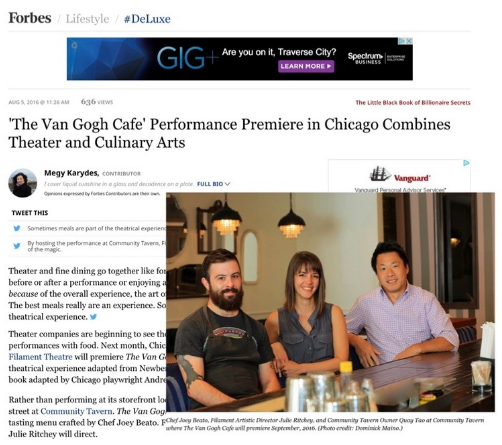